By Cheryl Suchors
Right now hawks are raising their young.
I’ve been aware of hawks, especially red-tailed hawks, since my tenth wedding anniversary when we celebrated with a trip to Sedona, Arizona. We signed up for a day trip to a “vortex” where the meridians of the earth come together and one feels a special energy conducive to meditation and the like. This is the sort of thing, besides hiking in gorgeous red rock country, that one does in Sedona, and I didn’t want to miss it. On the way to the place, the guide leaned out of the Jeep window and pointed out to us a hawk circling above us. “Red-tail,” he said. “See the flash of red?” 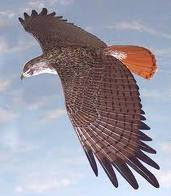 I didn’t see a flash of red no matter how hard I tried, but I’ve been alert to red-tailed hawks ever since. At my daughter’s grade school, a group from a bird sanctuary came to give a special presentation, bringing in birds of prey of all kinds. There I learned that red-tailed hawks are often called “highway hawks” because of their propensity to circle above highways looking for road kill.

So they’re smart, I figure. Perhaps a bit lazy? Or maybe that’s just easy for an animal who finds food at a grocery store to say.
What is true is that you will find red-tails in desert, grasslands, cities and parks, even, says the Cornell Lab of Ornithology, in the rainforests of Mexico. Being able to adapt to such varied terrain sounds pretty smart to me.
The Meaning of Hawk
In Native American and Wiccan traditions, Hawk is known as a messenger from Spirit. The message Hawk brings to those whom she visits is: be aware. “Watch,” she tells us. Perceive with that wonderful vision that lets Hawk see both the big picture and the minutest mouse in the grass. There is a signal intended for the person who sees hawk, a signal only s/he can intuit. Unraveling the message, as is true for all portents, tends to be an idiosyncratic task.

The general message of Hawk is live your life with a keen eye and be ready to dive upon an opportunity in an instant. I also understand it to suggest soaring—to get a different, wider perspective on events in one’s life. And maybe this is just my own interpretation, but Hawk instructs me in the twin arts of joy and rest. What could be more jubilant than flying? What could be more clever than using air currents to keep one airborne, gliding and resting while waiting for the moment of action to come?

For me, red-tailed hawks also symbolize friendship and partnering. I often, at least when they’re hunting, see a pair of hawks circling. Four eyes are better than two, apparently. The father of a brood also helps build the nest, find food and even sit on the eggs or the nestlings when necessary. Mated pairs typically stay together until death does them part.
Red-tailed hawks are also remarkably lightweight. Despite a wingspan of between three-and-a-half feet and nearly five feet, even the biggest females rarely weigh more than three pounds. Perhaps there’s a message here, too. If we want to fly, to soar, to move with the wind, we need to lighten up. Perhaps we are meant to reduce the burden of what we carry with us, be it physical, mental or emotional.
Watch a Red-Tailed Family Grow
One of the things I like best about these amazing birds is that they frequent the city. In Cambridge, Massachusetts, I’ve seen them perched high up in a tree in my neighbor’s yard or at Fresh Pond Reservoir. Or on top of a flagpole or the roof of a tall building.
Right now you can watch, close up and personal, an amazing daily miracle: two red-tailed parents raising a brood. Their nest is in a building (185 Alewife Brook Parkway) opposite a shopping center. You can see pictures of them from eggs to nestlings to fledglings, at Cambridge Community Television. Ernie Sarro who produces “The Expert Series” for CCTV, has a contest going to name the baby birds. He’s already christened the parents Ruby and Buzz. Check out his amazing videos of the red-tailed family!