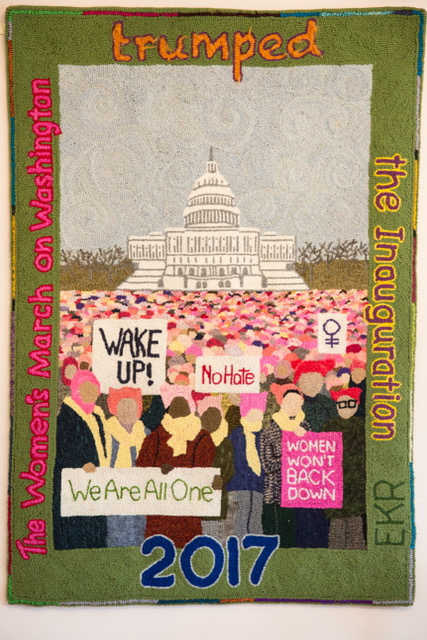 Today, Thursday 1st February 2018, seventeen people associated with WomenExplore met up at the Fuller Craft Museum in Brockton to view the Threads of Resistance traveling fiber art show, especially to see the rug hooked by our beloved longtime member, Emmy Robertson. Imagine our dismay when we discovered that the rug in question had been removed from display the day before to protect it from a water leak. After a little cajoling the museum staff graciously brought it out from a back room and placed it on a table so that we could see it!


The bulk of the show was beautiful quilts with pointed messages. I also saw a felted wall hanging and there was a corridor displaying a large variety "pussy hats" beside a discussion of the controversy raised by that term. A number of quilts deemed not suitable for children were sequestered behind a black curtain. The quilts came from as far afield as Australia and New Zealand.


Another special exhibit entitled Gender Bend featured the work of male fiber artists and women woodworkers. A number of the displays in this exhibit based on word play particularly appealed to me, including the Boxed Homonyms (Murder, Stamp, Rock), Lip Service and Bitter and Twisted. I also saw some of the exhibit on mental health. A display of a selection of works from Fuller's permanent collection included an incredible glass vase/teardrop created in a demonstration by Lino Tagliapietro, one of Venice's finest glassblowers and then donated to the museum fortuitously just as the museum was moving its emphasis to contemporary work.


The museum itself is housed in a beautifully designed building based on a rectangle of corridors with a number of galleries, a picnic room and a great hall opening outwards. Windows opening onto the inner courtyard or looking out over the adjacent pond or natural surroundings flood the building with light.
Posted by Susan N at 12:16 PM No comments: