This was a hike with history. On January 14, 1942 at 7:40 in the cold, dark night, a US B-18 Bomber crashed into the shoulder of Mt. Waternomee in North Lincoln, NH. The shock made tableware dance and windows rattle; even in Plymouth, 22 miles away, people wondered what on earth had happened.

Only weeks after the bombing of Pearl Harbor, the citizens of North Lincoln and nearby Woodstock initially thought they were being attacked by the Japanese. The first rescue crew to reach the crash site wasn’t sure whether they were aiding enemies or allies.

I won’t give away more of the story, but I will tell you that the heroism of the soldiers who survived the crash—and astoundingly five out of seven did—and the heroism of the townsfolk who worked so hard during a bitter blizzard to keep them alive, moved me deeply. 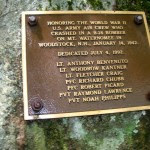 While the rest of our group settled down for lunch, I spent some time alone at the memorial site, thinking about these utterly amazing, utterly ordinary people, and lit a candle in their honor. 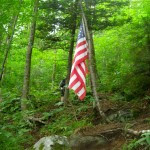 Everything I know about these people comes from a booklet written by Floyd W. Ramsey, The Night the Bomber Crashed. If you can, read it before you do the hike; it will make a difference, I assure you.

From Meadow to Woods

Despite a forecast of rain, we started off our 4.6 miles in sunshine and fine fettle, marching along an old logging road overgrown with grass and wildflowers. 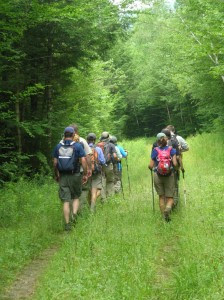 In about half a mile, we came to a surprisingly perfect circle of meadow that signaled our turn onto the trail, and a perfect spot for a group picture. 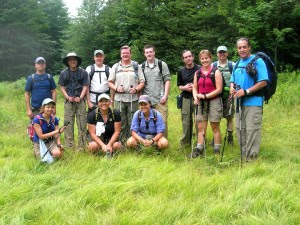 The trail was marked by a tiny cairn, nearly hidden in the grass, that someone had recently built to mark the way. 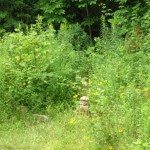 Entering the forest, the landscape changed dramatically. We charged along, sweating in the heat and humidity, grateful for the dense shade. Drinking, a lot of drinking, became de rigueur. 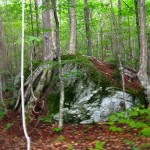 The trail steepened considerably, with much of the 1350’ elevation gain coming in the last mile. Sweat soaked our clothes. 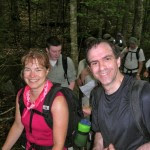 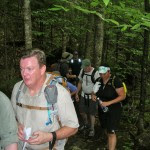 At least the footing was nice and soft, almost mushy on this un-maintained and rather unknown trail compared to the usual rocky tramp in the White Mountains. On the other hand, it was slippery. Going up wasn’t so bad, but later on, when we descended, people slipped and slid and the occasional ankle was turned, though none seriously.

I was merrily chatting away to folks from the “sweep” position, when I noticed that the line of hikers ahead of me had not only stopped but dispersed. What was up? It took me a moment to realize the lump of something to my left was not another rock, but an airplane engine. 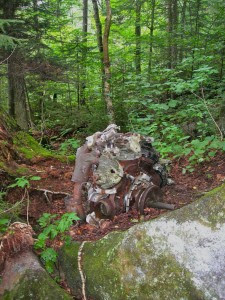 The B-18 crashed high and then skidded at an angle through the trees going downhill, tearing off its wings, splitting open the fusilage, and losing its landing gear in the process. But that’s not how you come upon the wreckage. You climb up to the last bits to fall off or explode away.

First you see an engine, then other chunks and hunks or metal and gradually you piece together a doorway, a hydraulic part, and then, at the highest part of the mountain, the wings. Looking down from there you can see the line the bomber made tearing through the forest to its final rest and the explosion of the plane itself and one of the 300 pound bombs it carried. 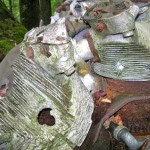 The remaining bomb lay there, near the burning wreckage, the entire time of the rescue. It was eventually detonated by military personnel the next day. Some of the wreckage takes fantastical shapes. Some of it looks like litter.

Parts of the plane flew far and wide from the various blasts, so the field of discovery is broad here in little traveled Mt. Waternomee. 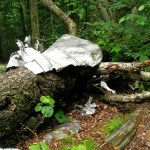 Though the burn marks and scars on the mountainside have healed completely, it’s astonishing how fresh the metal parts still look despite the nearly seventy years the forest has had to work on them. 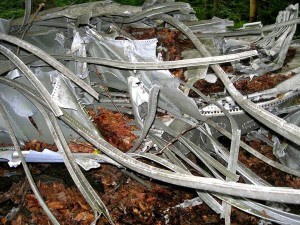 We Find the Falls

We ate lunch on the flattest spot we could find, surrounded by chunks of wreckage. It felt like sitting in some ancient ruins. 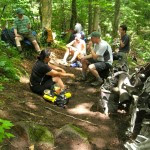 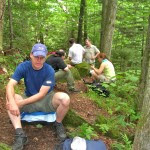 On our way down Mt. Waternomee, Robert was able to locate the falls he’d seen when he scoped out this hike a few months before. There’s no trail per se, one has to simply wait until the sound of water comes at you from both sides, the climb up the embankment on the left as you face downhill and voila! A beautiful, rugged stretch of rocks and falling water.

Some of us hiked down the steep embankment to the water’s edge while others rested on the trail above. Three adventurers, Andrew, Randy and Frank climbed up the mossy rocks to wet themselves with the cold water and enjoy the refreshing breezes. Not me. I was content to meander along the water’s edge and take pictures. 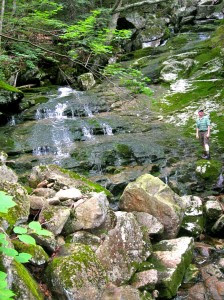 As we came near to the end of our journey through the forest, I noticed an arrangement of Nature that looked like wooden brushstrokes representing a Japanese or Chinese character. What did it symbolize? The word “peace” came to my mind.

What does it say to you? 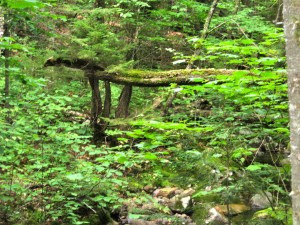 by Cheryl Suchors
Posted by TOP WebMs at 6:11 PM 2 comments: