WomenExplore Lecture and Discussion Forum reflects on significance of media

The following is a reposting of Johnathan Kindall's review of a day at WomenExplore's lectures on 16th March 2017.  It was published on 21st March 2017 in the Daily Free Press, the independent student newspaper at Boston University. 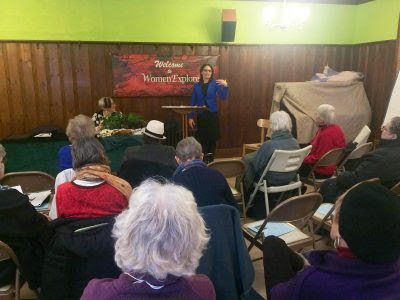 PHOTO BY JOHNATHAN KINDALL/ DAILY FREE PRESS STAFF
Stephanie Leydon speaks Thursday afternoon at the Democracy Center
about how media acts as an informer and manipulator in today’s society.

WGBH television and radio reporter Stephanie Leydon met with a group of Boston residents and students at the Democracy Center in Cambridge Thursday afternoon to discuss power, problems and importance of modern media and communication.
WomenExplore, a longstanding lecture and discussion forum, hosted the talk. The self-characterized charity with an educational focus was officially founded as the Theological Opportunities Program at Harvard Divinity School in 1973, but the origins of the group stretch as far back as the 19th century.
Every spring and fall, WomenExplore holds a 10-week lecture series. A different guest speaker is brought in every week, and the listeners discuss a topic for nearly two hours. The theme for the Spring 2017 sessions is “From Monologue to Dialogue: Building Community.”
Lindsa Vallee, of Brookline, has attended WomenExplore meetings for more than a decade. Vallee, who moderated Leydon’s lecture and discussion, said she finds every meeting uniquely stimulating.
“The topics, speakers and discussion keep my brain alive,” Vallee said. “They keep me thinking and aware of new issues.”
Each guest lecture is preceded by a “focus talk,” a short presentation from a member of WomenExplore that opens up the floor and prepares the minds of the group for the topic at hand.
Barbara Villandry, from Nashua, New Hampshire, provided the focus for Leydon’s lecture.
Villandry reflected on the days of Walter Cronkite and Edward Murrow, and reminded many of the attendees about a time where it seemed as if the news could be wholly trusted.
She voiced her concerns with the current state of the media, going as far as to draw comparisons between now and the times of Joseph McCarthy and his Communist witch hunt.
“The pendulum swings both ways,” Villandry said before giving the floor to Leydon. “And I hope that we will soon be back to a place where truth reigns supreme.”
The event then transitioned into Leydon’s lecture, which was centered around her recent attention to partisan divisions and the media following the 2016 presidential election. The title was “The Media: Informer or Manipulator? The Public: Discerning or Naïve?”
“In the months since the election it’s been my professional obsession,” Leydon said to the audience. “I can’t get enough of the divide story.”
Leydon’s feature on WGBH, “Greater Bostonians,” often focuses on individuals and their personal stories. The show’s mission is to highlight those passionate about social change.
“People let me into their homes and there’s a human connection,” Leydon said.
However, that connection isn’t always easy to make, she said.
“We’ve moved beyond identity politics, to politics being our identity,” Leydon said.
She continued to explain how, when she is working on segments for “Greater Bostonians,” many of those walls thrown up in defense of political identity start crumbling.
She drew on these grounded, everyday stories in her lecture.
One such story was that of a New Hampshire couple named Ben and Laura. The two, who had never been particularly active politically, were faithful Trump supporters in the election.
Leydon talked and checked in with the couple at multiple points throughout the election process, and her coverage of real, hardworking and honest Trump supporters resonated with a lot of her Boston listeners, some of whom had never met an ardent Trump fan in person.
Leydon said she wishes the mainstream media would have paid more attention to smaller stories like this during and after the election. She characterizes stories like Ben and Laura’s as a “window to our collective identity.”
She also said she believes that such a focus would begin to bridge the gap between the two sides of the political spectrum. She emphasized the importance of a media-literate public that can recognize blatantly false news and has the skills necessary to seek out truth.
The basis for media literacy is critical thinking, she said, but specific and catered media literacy classes in schools could be a vital step in the process.
“I don’t know how we have a discerning public without a media literate public,” Leydon said.
Vallee agreed with the necessity of starting a dialogue, which is exactly what WomenExplore is attempting to do with their lectures and discussions.
“The election results tell us that there hasn’t been enough dialogue in our country,” Vallee said.
Vallee said she believes that anything that opens up a discussion can create a more united country.
Leydon does not plan to stop telling the stories of real, everyday people on either side of the political divide anytime soon, commenting that even the discussion following her lecture gave her ideas for new stories.
“I’m a journalist,” Leydon said. “When I go out, I have a microphone and a camera. Sometimes I remember to bring a pen and paper. But most of all, I have my ears to listen.”