A person could easily forget. It wasn’t mentioned anywhere in my daily paper, The Boston Globe. Not March 8, the day of the event, and not the next day either. The results of the Academy Awards, of course, were mentioned everywhere. (At least, with Kathyrn Bigelow’s record-breaking Best Director win, there was something special for women to cheer.)

Guess what event triggered IWD? You may be surprised, as was I, to learn that a strike by Women Textile Workers in NYC on March 8, 1857, initiated this event. So says The Massachusetts Commission on the Status of Women. The strike was eventually commemorated around the world to highlight the struggles of working women and the need for women’s suffrage and equality of rights.

Naturally, it took a woman to declare March 8, International Women’s Day. The year was 1911. The woman was Clara Zetkin, a German labor leader and editor. Because of its foundation in labor rights, the IWD’s symbol is “bread and roses,” adopted from the labor movement of the early 1900s, to signify women’s rights to basic needs as well as to an enjoyable quality of life.

Big Day in Many Countries, But Not U.S.

A friend from Bosnia told me IWD was her favorite work holiday. The women in her company were paid for the day but instead of working, went to a party and received a gift from the company. How’s that for a concept? Another friend, from the States, said he had fond memories of celebrating the day in the former Soviet Union where women were given the day off and their bosses (mostly men) did their jobs. Whoa! At least in the white collar world, imagine how much bosses would learn by doing the work of their assistants and direct reports?

When I checked the IWD website to post an event in Boston, I was surprised to see that tiny (compared to U.S.) England had many more events going on that we did in this country. Then I noticed the website was a British one and consoled myself that it was because of that we came in second. After searching in vain for publicity and events in Boston, I have to say now: I don’t think so.

Here are a few photos from the event I participated in yesterday. The idea was for women to celebrate and honor women around the world by standing on a bridge—I love the physical metaphor—to show that we unite in bridging our differences, bridging the gaps in equality, and connecting with one another. The idea of meeting on bridges sprang from Women for Women International, a great group that supports women victims of war around the world. Women gathered on the Golden Gate Bridge in San Francisco, the Millenium Bridge in London, and on bridges as far away from these urban cultures as Uganda. In Boston, we chose the Mass Ave bridge that connects Boston and Cambridge.

Note how few people are in my pictures. The banner you see held by two women came from the World Conference on women in Beijing in 1995. The poster with the many colored female symbols was created to support Shirley Chisholm, the first black woman elected to Congress, when she ran for President in 1972. Chisholm had famously declared, "Women in this country must become revolutionaries. We must refuse to accept the old, the traditional roles and stereotypes." You may be sure we commented on how sad it was that the signs came from times we just knew were turning points that would significantly improve the world for women abroad and here in the U.S. 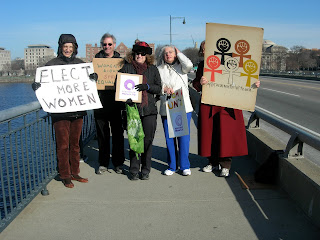 While we did make up in enthusiasm and originality in signage what we lacked in number, I hope next year shows an entirely different image: that women all over America are joining with women around the world to celebrate all that women are, do, and can be. I hope we come together in solidarity to recognize how much further we need to go to have equality in terms of pay, political representation, child care, health care, reproductive rights and safety from violence at home and on the streets.

I don’t know whether we in the U.S. have more of a problem with the concept of “international” or with celebrating women. They both seem to stick in the craw of too many Americans.

Whatever the reasons, let’s change this picture next year. Please. Put it on your calendar now: March 8, 2011, a day of recognition that a lot of change still needs to happen and a day of celebration for all that women do to better the societies in which we live.

"Women are still the majority of the world's poor, unhealthy, underfed, and uneducated," Secretary of State Clinton said. (Check it out in her State Department video message.) "They rarely cause violent conflicts but too often bear their consequences. Women are absent from negotiations about peace and security to end those conflicts. Their voices simply are not being heard."